I decided to do Strawberrry’s Meme...it didn’t seem that intrusive, so this shy girl tried it out.

How do you deal with criticism?

Criticism is such a sensitive topic.  I know I need it, but my mood decides how I deal with getting negative criticism.   Sometimes it rolls of like butter other times I have to find a dark corner and just sit and reflect.   It depends on who, when, where, and what.

What’s the most infuriating thing other SL residents do?

Disregard of newer residents because we haven’t been around as long others.  Just like everyone else, I’m trying to find my place.  People talk about retention and why people stay and why people go in SL all the time.  A welcoming community will make people stay, so when I see so many people go,  it makes me wonder.  I’m very, very quiet, polite, and I just have stayed to myself these last two years. Part of that I seriously take a lot of blame for, but some things have happened that just make me always feel like I’m on my tiptoes waiting for danger.

Which SL resident would you most like to have lunch with and why?

There are so many, but mainly cause I’ve never had the confidence to chat with them in world.  If I had to narrow it down to one person, I would say Harlow Heslop.  I met her once around two years ago.  A friend introduced us, and I just remember how much she reminded me of my friends from high school.  I remember chatting forever with those girls, so I guess Harlow simply because she reminds me of a good part of my past.

Who would you say is your “anti” role model? Someone who serves as a warning rather than an inspiration?

I’m so far from perfect that this question is just too hard.  I see the good in everything and I see the bad.  I haven’t met anyone yet that made me believe that the bad was so bad that I couldn’t stand them any longer.  I’m a forgive and always remember type of person though, so time will tell.

What was something you used to enjoy, but was ruined for you?

When I first started blogging I had no clue, I just wanted to find stuff that I liked no matter when it was released and no matter what it was. Now, I want to do the same, but I have some restrictions that I’ve willfully placed myself in.  I have taken some of the blog what you want when you want out of  my space.  I have no one person to blame.  I just like blogging for me sometimes, and I haven’t found that time in that for a very long time.

I used to enjoy exploring with my boyfriend as well, especially when we first started, but he left because people wanted him to take sides in drama.  He doesn’t do that stuff.  To him this game was escape, and they took that from him, and in a way took him from me because he no longer plays.

What’s something you want to do that you’d be embarrassed to tell other people about?

Have you ever fallen in love with another SL resident? Yes.

Describe a time/event in your slife that you’re nostalgic for.

No one and no time. I just wish my boyfriend would find out how special this life can be.

What’s something sweet you’d like someone to do for you?

Send me an IM to go do some dancing or something.  I never get out.  I see tons of things to do, but I feel a bit intimated to just go by myself.  It is always nice to know somebody is thinking of you and wants you to be there.

The Arcade is here again! I always, always find this event to be full of awesomeness. This time I decided to become the greatest hostess alive (exaggerated for effect).  Get ready for some long credits (and sorry, I was not going to rewrite them, so I just copied and pasted!)

Your taxi to The Arcade.

Me, as I unpack my Arcade stuff…I just snapped a quick picture using DOF with my wand and footie pajamas.  Um, if I had all the money in the world, I would still be at The Arcade trying to collect every single wand and jammie out there:

So, as I started to unpack, I realized I had tons of stuff. I just cleaned out my inventory a couple weeks ago, and this gacha thing made a serious mess. But, I had so much fun in the process that I didn’t care.  I don’t think I got one thing that I set out to get, but it didn’t matter, and I ended up loving the items I did get.   In a few months time I won’t remember any of that, but I will remember how The Arcade made me feel like a kid again.

Okay, so like so many others, I too have been mesmerized by the creations at Collabor88 this round.  There was one small problem.  It was really hard to pick just a few things.  I wanted to bunch it all up and throw it into my inventory. I had a bit of a hard time seeing some of it because even with wondering around for a while, the whole place was gray.  I think my computer is hating me or I guess it just could be that everyone else was there too, but I could not get anything to rez.  Talk about shopping nightmare.  So, I try my best to navigate (or appear somewhat intoxicated as a clumsily tried to find my way around) to a corner just so I could grab some demos.

Once I got home, I tried this dress by Ison.  Okay, I stopped demoing, and immediately knew I wanted to blog this piece first.  It is so classic and simple and lovely and elegant.   While I did love this piece, the sheer layer made it hard to photograph in certain locations because it would blend into the horizon and the folds in the dress didn’t show up as nicely when you were just walking around normally, so I might have (I did)  smooth those out in Photoshop.  For daily wear, this dress is absolute perfection, and I can see myself wanting to wear this dress over and over again just so I can feel purty all the time.

Leverocci released new dresses and boots this past week.   Part of me seriously just wanted to know how this dress fit.  I mean really?! It is fabulous looking.  How in the world she got mesh to do this is beyond me.  I can’t think of anything I would want different.  It is perfect.   I added Leverocci’s new boots,  Altai in chocolate, because her shoes are perfection and I personally tend to wear them quite a bit, so I knew I would get some wear and tear out of them.

I also added Truth’s new hair, Cheyenne in Seasand. I think this might be my new favorite color.  I love this hair.  It may also be my favorite Truth Hair so far (until next week)!  My jewelry comes from Handverk and Maxi Gossamer.  The necklace by MG, Jeweled Love,  is from the event Cinema. I just kept staring at the necklace once I had it on.  It is extremely well crafted, and it promotes love.

So I am back from my little trip to NYC.  If you don’t follow, I have been out of town for the last month and seriously missing my fashion outlet in-world.  NYC was amazing and I ended it on a great note: seeing friends tie the knot!  The views from the reception were stunning–every side had a view of something i.e Fifth Ave and Empire State Building!   My hometown in the Midwest is so quiet in comparison.

I decided to get reacquainted with Second Life and picture taking, but I was in dire need of some new items! Lucky for me FaMESHed had a ton of new items!  Great timing.  I bought this top thinking I could hold off doing a blog post until 52 Weeks of Color came around (since the color is yellowish), but I just couldn’t help myself.  The top by Bilo is adorable–very retro, so I decided to do some Second Life exploring and found this cute little beauty shop in Pleasantville.  There other little places around the area, but it looks like it is a work in progress because some structures had nothing in it.   It did have water, playgrounds, an RV, tent, and a few others things. I immediately thought of Vintage Fair coming up, and I think it would be a great location for pics!  All those blogger posts about Vintage Fair have given me a bad case of the grabby hands!

There are tons and tons of  other great items at FaMeshed–including my hair and the shorts- that you really can’t see-, but they worked with my outfit!

Lemon Chiffon doesn’t sound very tough. BUT. When you add a killer hair style, stunning jewelry, and some dark sunglasses, it can be!  I am reallllly loving the jewelry from Handverk.   If you haven’t stopped by their main store, go check them out!  I love that ring!   Wasabi Pills put out a short hairstyle.  I love short hair.  I believe someone said longer hair sells better, so I know when short hair comes out to relish in it.

I guess there is some sort of debate about sculpted versus mesh–or at least whether to delete all sculpted items from your inventory.  Mesh is awesome and beautiful when done well, but I still think sculpted pieces have their place, especially when they are also done well. I shop for what is pretty and speaks to me. I look for well-crafted, but also innovative and creative pieces, mesh AND sculpted.  Today, I will show you an example of an excellent sculpted piece by Jack Spoon available at Culture Shock.

The back, the pattern, the flowing skirt added to the middle made this dress stand out to me.  It is unique.  I still love dresses that flow and the mixture of sculpted pieces with added flowing pieces appeals to me.  I like how they look in photos too, and really that is what I do on a blog–Make an attempt at taking a great picture.  This dress helps me do that.  It is beautiful piece.

END_OF_DOCUMENT_TOKEN_TO_BE_REPLACED 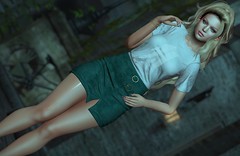 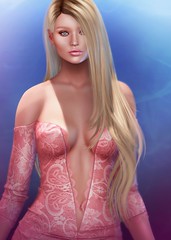 Directory of Stores in SL